SpecFlow is a Behavior Driven Development (BDD) tool for .NET.  SpecFlow has brought the Gherkin language to .NET and to Visual Studio!  This post will set you up quickly with SpecFlow with a simple example.

Once installed, there are three new Visual Studio templates that will be installed including the

For this example, we’ll use the Roman Numeral kata.  While this is a relatively simple kata, the purpose is to help navigate through SpecFlow.  So, let's begin:

1.  Create a new project and create a SpecFlow Feature File:

The Step Definition template has code with sample steps in the class.  Delete everything inside the class but not the class itself.

There are a couple of different ways to generate steps once a scenario is given.

SpecFlow will offer to put the step binding skeleton in your clipboard and then it can be easily pasted into your steps definition file.  Note that if the step already exists, Specflow will navigate you to the step definition automatically, just like F12 does with “GoTo Definition”.

Using TestDriven.Net right click on the feature designer file (extension of .feature.cs) click “Run Test(s)”.  For each scenario, SpecFlow will create a task that contains a StepsDefinition class.  This class can be copied and pasted into the steps definition file.   It should look like the following: 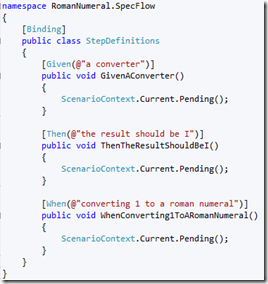 By default, SpecFlow is setup to use NUnit.  You can configure SpecFlow to use MSTest, if so desired.  Generate the steps with the correct xUnit assertion statements to make the tests pass for each step.

Running Tests are very similar to generating the steps.  Once the steps are generated and beautiful code is written to get the tests to pass, right click on the feature designer file and click “Run Test(s)”.  If steps within a scenario are still pending, the following message will be displayed:

Hopefully this gets you familiar with SpecFlow and some of the advantages of this tool being integrated into Visual Studio.  Happy trails with your SpecFlow journey!

Posted by Matthew Bussa at 3:26 PM